Our first true fruit from the garden! Pop picked it this afternoon and ate it within a few minutes of me photographing it. Which is good because Pop’s been having asparagus and radish dreams for weeks. Although we could easily remedy it with store bought, he maintains they are truly best just fresh from the dirt.  And will I understand this on a personal level other than optical appreciation anytime soon? Probably not since that was the one and only radish we had come up from our March planting. (Too cold, not enough rain). But this one little husky brute persevered and was eaten and enjoyed as it’s own reward.

Otherwise in the garden, everything from the greenhouse that we started from seed in February has now been in the garden for a week or more and is going nuts being in real dirt! Sunflowers have been planted all along the fence between the GH and the garden as well as a few urns of flowers out front.  Pop & I got a 75 ft soaker hose for Pop to cut down into pieces and installed it along the row between the peas, beans & big tomato plants fed from from the Big Mamu cistern up at the house under the deck. Still trying to get a feel for the flow of the drip since it’s all gravity fed and I am suddenly obsessed with weather systems in a new and fascinating way . 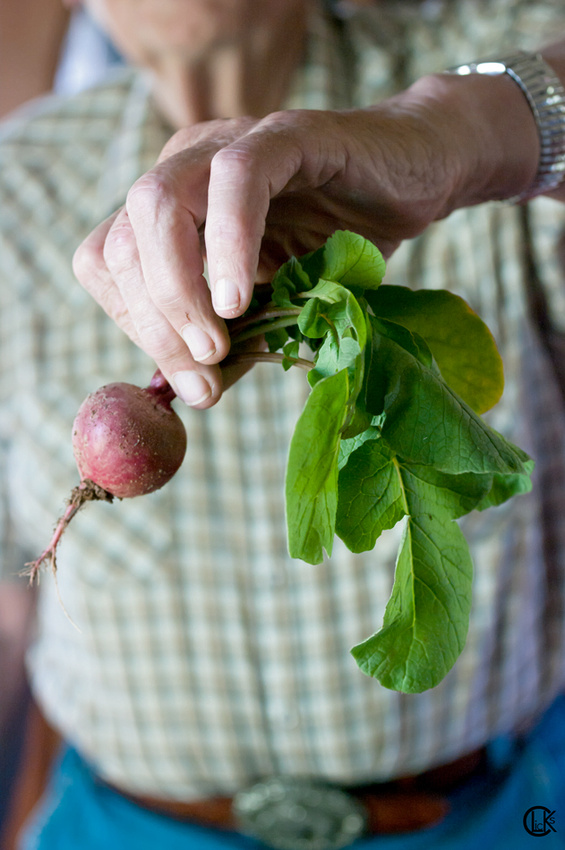